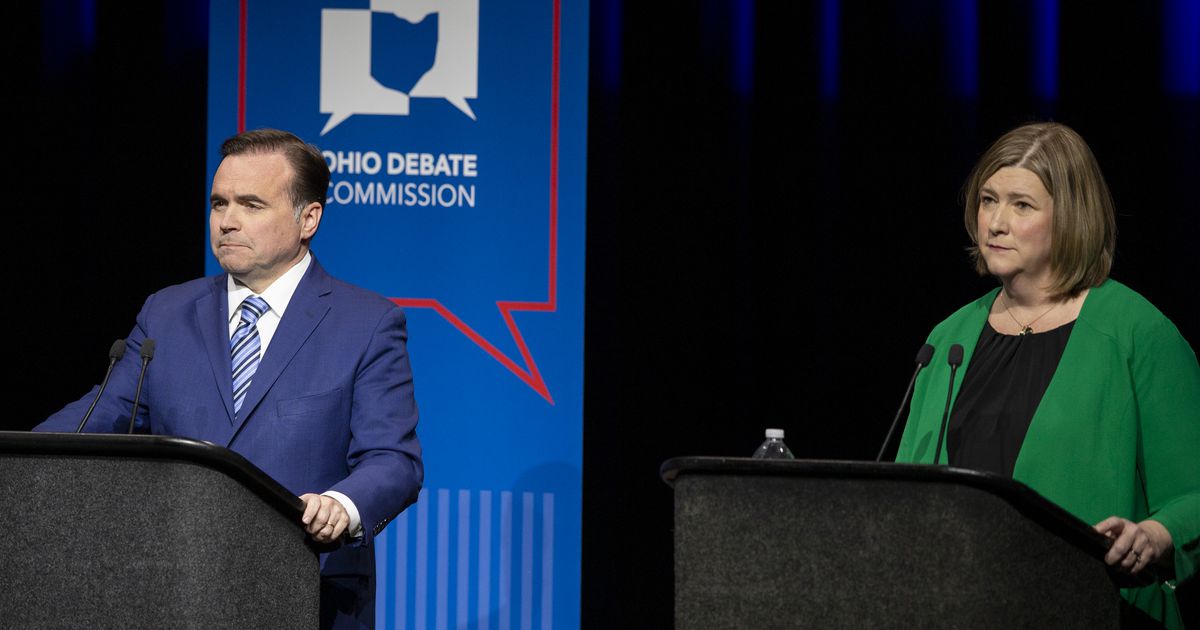 We’ll be looking at where candidates from both parties stand on five key issues in articles Monday through Friday.

Ohio did not decline, but the 2020 census showed slower growth than the rest of the country.

Ohio has six cities with populations over 100,000, including Dayton. Most have been in decline for decades; only Columbus has seen steady growth.

“But only Cincinnati made the comeback,” grew twice as fast as the state as a whole, Cranley said. At the same time, the city’s poverty rate also fell faster than the state’s, he said.

“Things are going well, and I think the key to that is getting things done,” Cranley said. “So much of Ohio is in economic decline, outside of Cincinnati and Columbus, that there are very few people who can claim what I can claim.”

Key to that turnaround has been work on racial justice and police reform, he said. Cranley said her faith finds meaning in helping to reduce poverty and expand opportunity. That involves, in part, pushing for a $15 minimum wage and investing in clean energy development, he said.

Cranley, 48, grew up in the Cincinnati area, the son of a US Army Vietnam veteran and a schoolteacher. He attended Catholic schools.

“I was taught that trying to make the world a better place was the key to a meaningful life,” Cranley said.

He is a graduate of John Carroll University, Harvard Law School and Harvard Divinity School. Cranley worked for several years as a lawyer, and in 2002 co-founded the Ohio Innocence Project at the University of Cincinnati Law School with Mark Godsey, which exonerated and released 34 wrongfully convicted prisoners.

He was elected to the Cincinnati City Council and served from 2000 to 2009. Cranley lost two congressional races, but won the mayoralty of Cincinnati in 2013 and was re-elected in 2017.

“I’ve maintained my relationship with him since that time, and we’ve been friends and worked on a number of projects,” Luken said.

After Cranley’s elevation to mayor, Luken watched Cranley deal with race relations, job creation and a population turnaround, bringing together the “broadest spectrum” of residents to deal with the problems.

“He’s one of the most effective public office holders I’ve ever met, if not the most effective,” Luken said. “He is stubborn in his determination to make improvements where he sees problems. This is the characteristic that I would remember the most.

Cranley said he has worked well with Republicans in the Cincinnati city government and believes he can work with the Republican majority in the General Assembly.

If elected, Cranley has three priorities for his freshman year:

He said those positions were “extremely popular” across the state.

“Broadband broadband is the No. 1 problem in rural Ohio,” Cranley said.

If lawmakers don’t support these initiatives, he would try to push them through as statewide referendums.

Cranley and Fedor also pledged to “fully fund public education within the first 100 days,” Cranley said. According to Cranley, this would be the first time since the 1997 DeRolph decision that Ohio’s school funding system was inadequate and unconstitutional.

Asked how such initiatives would be funded, Cranley noted that the governor drafts the state budget.

“Ninety percent of the power of a budget is the first draft,” he said.

“I entered this gubernatorial race because I think Ohio deserves better,” she said.

Tackling corruption would be Whaley’s first job as governor, she said, noting that her first campaign was an anti-corruption plan.

This would include creating a public accountability commission so that politicians cannot “police themselves”; ending the “revolving door” between state regulators and big business; increase the transparency of money in politics; and have every member of his administration sign an ethics pledge, she said.

A native of Mooresville, Indiana, Whaley is a graduate of the University of Dayton and Wright State University, earning her master’s degree in public administration from the latter in 2009.

She held several public positions before and during her terms in Dayton city government, including as executive director of the Montgomery County Democratic Party and a four-time delegate to the Democratic National Convention.

Whaley, 46, served two four-year terms as Dayton city commissioner before being elected mayor in 2013 and re-elected in 2017. She served as president of the United States Conference of Mayors during his final year as mayor of Dayton. She planned to run for governor in 2018, but dropped out and endorsed Richard Cordray, the eventual Democratic nominee.

Whaley was raised in a working family to be civic-minded, said U.S. Sen. Sherrod Brown, D-Ohio, whom Whaley describes as a mentor.

“She will see every decision through the eyes of working people when she is governor,” he said.

Brown said he has known Whaley for at least 15 years.

“I saw the kind of committed activist she was,” Brown said. He watched her work under pressure and liked the way she ran the town.

“She’s good on a day-to-day basis and she’s good under fire. That tells me she’ll be a good governor,” Brown said.

She endured a particularly difficult 2019, including a rally in May by a racist group, heavy damage from tornadoes on Memorial Day and a mass shooting in the Oregon district in August.

Under Whaley, Dayton joined hundreds of local governments nationwide in a lawsuit against opioid manufacturers and distributors. A settlement proposed late last year would send $2.7 million directly to the city and much more to a regional authority, much of it to be used for drug treatment.

Dayton continued to lose population, as it had since 1970; but that loss slowed to less than 3% during his tenure, according to census results.

If elected governor, Whaley would push for a $15 minimum wage, she said, and seek to boost small businesses. The state has previously celebrated major economic development projects that only help a single metro area, but improving the land for small businesses would help communities across the state, she said.

She would support the development of renewable energy and seek to “completely repeal House Bill 6”, the outrageous bailout of public utilities.

A November 2021 study found that more than 1.7 million women left the workforce during the COVID-19 pandemic. Whaley attributes this in large part to the lack of access to affordable childcare, so addressing it would be one of her top priorities.

Whaley thinks Ohio is “not as radical as it is governed,” but a preponderance of polarized legislative districts encourages extremism in the primaries.

A more competitive district map would reduce radicalism and create “real opportunities” for compromise, she said. But if that doesn’t happen, “we’ll use the bully pulpit (in the governor’s office) to really get people on board” and pressure lawmakers, Whaley said.

Brown said he used Whaley as a sounding board for what communities needed from several federal relief programs, and that helped shape how the money could be spent.

Brown said Whaley was “very well placed” to take on Republican incumbent DeWine, but after the recent Democratic gubernatorial debate he texted both candidates thanking them for focusing their criticism on DeWine rather than one over the other.

“I’m for Nan, I’m not against Cranley,” Brown said.

Today’s stories focus on the Democratic candidates for U.S. Senate and Ohio Governor in the May 3 primary. Next Sunday, April 17, we will profile the Republican candidates in those races. We’ll also look at where all of the gubernatorial candidates stand on five key issues in stories Monday through Friday.