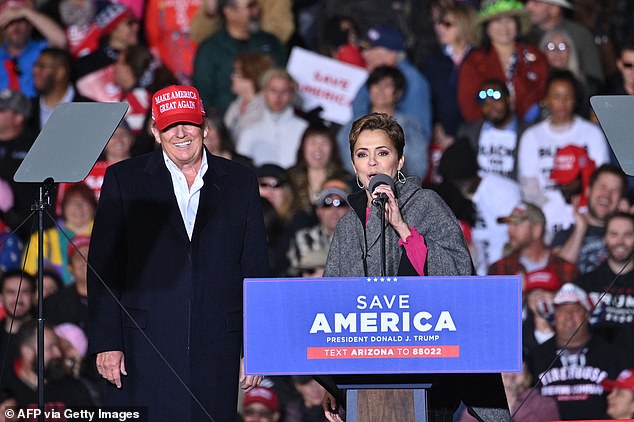 A right-wing US politician has bizarrely accused Australia of ‘running internment camps’ after being quizzed over the attack on the US Capitol.

Republican Kari Lake, who is backed by former US President Donald Trump, sat down with 60 Minutes veteran Australian journalist Liam Bartlett for a Zoom interview as part of a segment on the US political system.

But the 25-minute exchange quickly descended into chaos, with Ms Lake, who is running for governor of Arizona, coming out and calling him ‘crazy’.

Ms Lake began making her absurd claims about Australia when Bartlett started telling her about the 2020 presidential election and the riots at the US Capitol.

Republican Kari Lake, who is backed by former US President Donald Trump, (pictured together) called an Australian journalist ‘completely crazy’ in a heated clash after an interview

The explosive argument video, which has leaked online, shows Lake slamming Australia for its mask mandates and claiming the country has revoked its democratic rights by “melting down its guns”.

The footage was filmed by Ms Lake’s husband, Jeff Halperin, as a condition of the interview and soon began circulating on right-wing websites.

The conversation started smoothly before Ms Lake became tense when Bartlett questioned the politician’s debunked accusations that the 2020 presidential election was rigged.

“To a large extent, across the United States, you’ve had election officials, court officials, judges looking at this,” Bartlett said, contradicting his claims.

“There has been no evidence, no evidence has been presented in a single court in your country that proves that there is electoral fraud. I mean, if it’s true, if it was stolen, as you say, why is there no proof, a year later,’ Bartlett said.

Ms Lake said: ‘It’s really rich that someone from Australia is coming here to try and tell us how our election went.

“You haven’t done your homework either.”

Ms Lake repeated that US election officials were ‘corrupt’ before telling Bartlett he was ‘really rich’ for an Australian to ‘tell us how our election went’.

Ms Lake, who also claimed Trump’s face should be added to Mount Rushmore, then accused Bartlett of ‘not doing her research’, with the reporter reiterating that no hard evidence has been presented to support her claim. his assertions.

She then claimed that “Australians don’t even have any freedom”.

“What I don’t like is people being held in jail without being charged, it’s not American, maybe they get away with this stuff in Australia,” he said. she declared.

“Maybe in Australia because you’ve given up your rights, you’ve melted down all your guns and you don’t have any freedom, but you think that’s okay.”

“But here in America we do things differently, we have something called the American Constitution and we have rights.”

Ms Lake was referring to the sweeping ban on automatic and semi-automatic weapons by former Conservative Prime Minister John Howard after the Port Arthur massacre in 1996, in which 35 people were killed and 23 injured.

The US politician continued her tirade, saying Australia would be better off with more guns, not fewer.

“I feel so sorry for Australians, (who) have no power, the only thing stopping us from being Australia right now or Canada is our second amendment, and we will never let that go.

‘What we’ve seen happen in Australia, internment camps and people being forced – if they’ve met someone with Covid – to be locked up in a quarantine camp is the most horrible thing I think I’ve ever seen a government do.

Bartlett continued to ask Ms. Lake about her thoughts on the Capitol riots on January 6, 2021, frustrating the American who claimed “you keep asking the same questions and I already gave you my answer.”

She then stood up and began to end the interview, removing her microphone and thanking Bartlett for his time.

But after the reporter accused Ms Lake of leaving when ‘the going gets tough’, the bickering only escalated, with the politician claiming she had already given the news program the ‘promised 15 minutes’ .

Bartlett shot back that he didn’t believe that was true, with Lake saying, “I’m sorry you asked the same question three times and wasted your time”.

Lake then accused Bartlett of being biased and trying to tell her how she should see the world, which is not her “job”.

Bartlett responded by asking if that was the “Trump people” way of doing things, “have a narrative and that’s it, you can’t think outside the box.”

“Sir, I believe you have that narrative,” Ms Lake said.

“I don’t live in Australia, are you really a respectable journalist there or are you considered a joke?”

The row continued for a few more moments, with Ms Lake accusing Bartlett of being one of those people who would ‘make her children wear masks’ before storming out of the room.

Lake, who is running to become governor of Arizona, asked her husband to tape the conversation as part of his terms of attendance