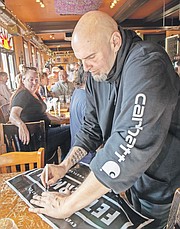 JOHN Fetterman doesn’t look like a Washington politician. And that’s an understatement. This former mayor of a Rust Belt relic and current lieutenant governor of Pennsylvania is an NBA-sized white man with a shaved head, goatee, visible tattoos and, to put it politely, a eccentric taste for clothing on the campaign trail. Nor did he follow a traditional path to political prominence. And yet Fetterman won a resounding victory in the primary election this week to secure his place in the November ballot as the Democratic nominee for a U.S. Senate seat from Pennsylvania, critical to his party’s hopes of clinging on to its current precarious majority in the Senate.

Fetterman was a supporter of Bernie Sanders as early as the 2016 presidential primary campaign, and while he certainly embraces many parts of his party’s “progressive” platform, he has made it clear that he decides issues on their merits. individual. This giant man, who looks even taller than his six-foot-eight height by the way he dresses and his casual grooming, has built a reputation for something that’s largely lacking in American politics these days. : integrity.

In a four-way race in Tuesday’s primary election, Fetterman won 60% of the total vote. He won every county in the state. Winning an absolute majority in a contested four-way race is rare, to say the least. Republicans, whose Pat Toomey is stepping down from the seat sought by Fetterman, should be wary in November. They may be up against a politician who voters can believe.

It’s currently unclear who Fetterman will face in November. There was a three-way Republican primary race between hedge fund millionaire David McCormick; a TV doctor, Mehmet Oz, and an incredibly radical right-wing fanatic named Kathy Barnette, who is also a black woman. This race was close and both men are heading for a recount as the margin between them is really small.

Whoever ultimately wins for the GOP isn’t heading for an easy contest six months from now. More and more rarely, but still every once in a while, an American politician steps out of national obscurity to develop a solid base and generate real momentum that may prove irreversible. Based on the evidence so far, John Fetterman could be one of those fascinating mysteries.

“At the heart of his argument, he’s one of those unique candidates who really forms a connection with voters,” a party strategist told reporters. How refreshing.

The death toll from COVID in the United States has just exceeded one million, or nearly three percent of the total American population. That would equate to more than a thousand deaths here in the Bahamas, where the toll currently stands at 801. Several American publications have studied the evolution of the pandemic and have come to some interesting conclusions. Here are a few:

The first death in the United States was reported on the last day of February 2020. In seven weeks, the reported death toll reached 34,800, more casualties than in the wars in Iraq and Afghanistan combined, plus the terrible potential tally of nine attacks like 9/11. terrorist attacks on New York and Washington.

In eight more months, the death toll from COVID had topped 300,000, and that was just before January 2021, the pandemic’s worst month yet, when 96,000 Americans died. However, in six months last July, that macabre monthly toll had fallen to less than 9,000.

By the end of October 2021, fueled by the arrival of the delta variant, the total reached 744,000 and exceeded the number of Americans who died in the infamous 1918 flu epidemic. Now in the grip of the omicron variant, the United States United are reeling again. And protests against vaxxers and masks are proliferating.

Good news on the ice and on the court in Florida

A record with the South Florida ice and hoops playoff teams is at least partly reassuring. The Florida Panthers took care of business against the Washington Capitals and Alex Ovechkin, who could still break the all-time NHL record now held by Wayne Gretzky. Ovechkin, whose outspoken Russian patriotism put him on the wrong side of American public opinion during the Ukrainian war, is only ahead of Gordy Howe by 21 goals and Gretzky by 114. He is 36 years old. He’s still a prolific and ruthless scorer, but the Panthers are recognized as a ruthless team themselves. Once they got over the jitters of the early playoffs, they prevailed.

Now the Cats face interstate rival Tampa Bay, who beat the Toronto Maple Leafs in their first-round game. The Leafs, one of professional hockey’s Original Six franchises, haven’t won the Stanley Cup since 1967, or a playoff series in 18 years of sustained futility. The Leafs play in Canada’s great metropolis, have a rich history of success and are certainly one of the most revered franchises in the game. Their long lack of success, especially in light of the continued relevance of their Montreal playoff rival playoffs, has been a frustration for many hockey fans, in Canada and elsewhere.

But the Leafs faced a juggernaut in the Lightning, the two-time defending NHL champion. And now the Panthers too. The Cats are not favored by many bettors despite their superior regular season record. Their courage and comeback skills will be put to the test by the stars of Tampa. In Tuesday’s opener, the Panthers crumbled in the third period to Tampa’s relentless power play and lost 4-1, squandering their home advantage for the series. If you support the Panthers, it’s very hard to be optimistic about their chances.

Meanwhile, the Miami Heat host the Boston Celtics along Biscayne Bay in the NBA Eastern Conference Finals. The Heat had a much easier path to this round, and that may be an indication of continued success. Still, the Celtics, who have an even richer history in basketball than the Leafs in hockey, are good. By dethroning the defending champion Milwaukee Bucks, the Celtics remained committed to their league-leading defensive approach and earned enough individual points from their stars to oust Milwaukee.

However, the top-seeded Heat have the number four ranked defense themselves. And both of these teams are playoff tested. The Heat will make their eighth playoff appearance in the past 18 seasons, while the Celtics will make their seventh in the past 15. Miami is looking to qualify for the NBA Finals for the sixth time in the last twelve years. Boston hopes to chain four consecutive defeats in the Conference Finals, including two against the Heat two years ago. The Heat and the Celtics should offer a fascinating and balanced game.

In the West, man-child, 23-year-old Slovenian Luka Doncic, forced the Dallas Mavericks past the heavily favored Phoenix Suns. The Mavs will now face those shrewd championship veterans, the Golden State Warriors. Seth Curry, Klay Thompson and especially Draymond Green will likely win over Doncic and Company, but it was amazing to see Doncic on the floor against Phoenix. He looked like a man against boys on multiple occasions, moving around the perimeter and then to the basket with easy, almost effortless efficiency. But Green and Thompson know how to play defense, as does this entire second-ranked defensive team. Curry will light up the dashboard. The Warriors should win.

Who will they face in the NBA Finals? On Tuesday, the Heat fiddled with the first half. Then their talisman, Jimmy Butler, scored 17 points in a decisive third quarter that the Heat won by 16 points. The hosts secured a crucial triumph in the opener. If they continue like this, the Heat should find themselves facing the Warriors in the Finals. It will be a treat.