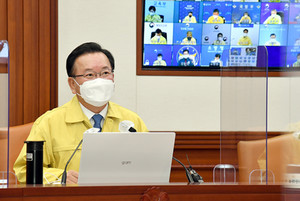 Prime Minister Kim Boo-kyum tested positive for Covid-19 on Thursday, making him the most senior government official to test positive for the virus.

According to Kim’s office, a polymerase chain reaction (PCR) test on Kim came back positive, adding that he will receive home treatment for seven days at his official residence in Seoul. Those who came into contact with Kim tested negative in rapid self-administered antigen tests.

Kim tested positive for the virus after taking a rapid antigen test result earlier in the morning. Kim reportedly felt symptoms of the virus after visiting Daegu on Monday to attend an event commemorating the 1960 democratic uprising in the city.

Kim was one of 198,803 new Covid-19 infections, including 198,749 local cases, bringing the total number of cases to 3,691,488, with the positivity rate among those who received the test climbing to 51%, according to the Korea Disease Control and Prevention Agency (KDCA). ). However, despite the number of confirmed cases hovering around 200,000, the rate of increase has slowed, he said.

Quarantine authorities believe the rate of increase is slowing as the outbreak nears the peak and expect the number of new confirmed cases to peak within one to two weeks.

As the epidemic reached its peak, the government held a separate meeting to consider the early adjustment of the current social distancing, originally scheduled for March 13.

According to media reports, the government is considering relaxing the current distancing plan by increasing its limit on private gatherings from six to eight or 10 people and a nightly curfew for businesses from 9 p.m. to 11 p.m. or midnight.

The government plans to finalize the adjustment to its distancing measure and announce it on Friday.

On Monday, Health Minister Kwon Deok-cheol said the government needed to relax the system for some low-risk facilities because there is a low risk of transmission if everyone wears masks.

However, some experts have pointed out that it is premature to relax quarantine measures, as the number of new infections, severe cases and deaths continues to rise and the epidemic has not yet peaked.

The number of seriously ill patients also hovered around 700, with the KCDA confirming 766 serious patients on the same day.

As the number of seriously ill patients increases, the occupancy rate of intensive care beds, which quarantine authorities say must be kept at a stable level, has also increased.

As of midnight Thursday, the national hospital bed utilization rate for patients with severe Covid-19 was 50.7%, up 0.6 percentage points from the previous day.

Of the 5.86 million kindergarten and primary, middle and high school students across the country, more than 158,000 have been told not to attend school due to possible Covid infections -19.

The Department of Education had advised students to take rapid antigen tests and enter the results on the designated self-testing mobile app before attending in-person classes.

According to the Ministry of Education, approximately 4.91 million students have completed the instruction. The ministry has told 158,171 people to stay home because of potential viral symptoms for them or their family members, positive test results for Covid-19 or undecided polymerase chain reaction test results.

The government has fully vaccinated 44.37 million citizens, or 86.5 percent of the total population, and provided boosters to 31.57 million people.