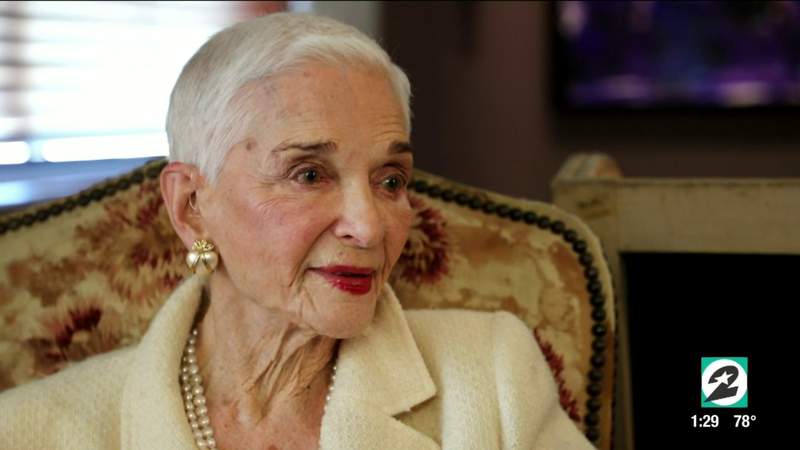 HOUSTON – Frances “Sissy” Farenthold, a Texas civil rights pioneer, died Sunday at the age of 94 after a long battle with Parkinson’s disease.

Sissy was born in Corpus Christi in 1926 and has spent her life working for equal rights and social justice.

She was one of the first female representatives of the State of Texas, a candidate for governor, wife and mother of five, and champion of equal rights for all. And this list only scratches the surface.

In 1946, Sissy graduated from Vassar College in Dutchess County, New York, and decided to continue her law studies at the University of Texas. In a student body of 800, Sissy was one of three women.

After graduating from law school, Farenthold returned to Corpus Christi to practice law in her father’s office. In 1950, she married businessman George Edward Farenthold. Together they had five children: Dudley, George Jr., Emilie, Vincent and Jimmy. She was also the mother-in-law of Randolph, George’s son from his previous marriage.

She took a break from practicing law while raising her young children. But she maintained her bar membership at the request of her father, who paid her dues, and she became involved in civic affairs. She served on the Human Relations Commission of the Corpus Christi City Council from 1963 to 1965.

In 1965, she returned to the practice of law as Director of the Nueces County Legal Aid Program. The experience exposed her to the racial and economic injustice that Mexican-Americans, poor South Texas women and children suffered and reinforced her commitment to social and economic justice. It also inspired his candidacy for the Texas legislature.

In 1968, Farenthold was elected to represent the counties of Nueces and Kleberg in the Texas House of Representatives. At the time, she was the only woman in the House. Farenthold spent her first two-year term focusing on civil rights and economic opportunities for poor women and children. She also co-sponsored the Texas Equal Rights Amendment, which was approved by state voters in 1972.

But it was her support for open government and ethics reform as a key member of a coalition of lawmakers known as Dirty Thirty that made her a name across the country. State and a political force.

After his retirement, Farenthold was honorary director of the Rothko Chapel and served on the advisory board of the Rapoport Center for Human Rights and Justice of UT law. She also continued to lend her voice and support human rights efforts around the world and in Houston.

Political icon “Sissy” Farenthold passed away on Sunday September 26th. Please attribute the following statement to Houston Mayor Sylvester Turner. The life of “Frances” Sissy “Farenthold was an inspiration to women, people of color and the helpless. She came from a privileged upbringing but possessed a sincere desire and ability to connect with Texans from all walks of life. Sissy believed that everyone deserved to be treated fairly, regardless of their birthplace, gender or skin color. â€œShe was a strong advocate for civil rights and a strong advocate for women in public service. I will always admire her courage in campaigning for the Texas House of Representatives and running for governor twice at a time when women did not run for public office. She won through thick and thin, and in 1968 she was the only woman to serve at Texas House. Sissy has never allowed a male-dominated legislature to discourage her from using her voice and intelligence to make a difference in the lives of all Texans. â€œNow more than ever, Texas needs leaders who can unite us rather than divide us and who dare to fight for abortion rights, access to the vote, the poor, families and children. â€œI’m going to miss Sissy Farenthold. There will never be another like her.

NJ governor candidates will have their first debate