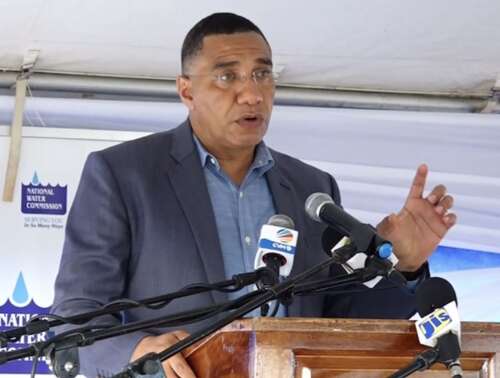 If you watched the Monday, August 8 conversation between former prime ministers Bruce Golding and PJ Patterson on Television Jamaica (TVJ), you would have noticed the change midway through when host Dionne Jackson Miller asked about the inability of the state to stop the flow of murders?

Both were as sharp as cane-cutting machetes at the impeachment of the Queen as Head of State and, by extension, Governor-General, but awkwardly answered the question. Bruce was shaken and less adamant. Unusually, he tripped. He told a policeman’s story about members of the community who don’t say what they know, while Patterson recounts his values ​​and attitudes contrary to the growing “materialism” of the Jamaican people.

No one will dispute the truth of these realities. Far less palatable, however, is the underlying message. Have you spotted it? It’s shifting the blame for the murder rate from the rulers to the ruled, from the politicians to the people. No, no, no, Golding, Patterson and Andrew Holness too! We do not accept this scheme. The responsibility of the people is indisputable. But who has primary responsibility for crime control and murder? Why is there a Ministry of National Security?

And as for “kibbering yuh mout” on which criminal killed, who led the way? How many criminal donations have politicians closed their doors to? What happened to that list of names that Edward Seaga is reputed to have compiled for the police? This assertion needed, it seems, only a brief message from Dudus. As for materialism – who parades down Duke Street in the biggest, shiniest SUVs on the days of Parliament? Who has the tallest and widest retaining wall in Jamaica supporting their splendid residence?

To manage the rise in murders, Patterson has done a wonder. Unlike Michael Manley, he didn’t go to the police, use force and a felony law. He consulted Chief Justice Wolfe, academics and civil society and he did this kind of combination three times – in 1992, 1996 and 2002 – a commission and two national committees. The three came separately but came unanimously to identical conclusions: to significantly raise the standard of living in crime-prone communities and to reform the police. This is the same conclusion reached by the West Kingston Commission of Inquiry into the incursion into Tivoli Gardens in its 2016 report to the Holness government.

Now I ask you: what administration in Jamaica’s 60 years has implemented this? Not even Patterson, after receiving the same story from his committees. Yes, they fiddled with bits and pieces of each, but they didn’t do it comprehensively.

My call for inner city youth opportunities at the recent launch of Jamaica Fractured Nation Vibrant People was dismissed by Golding in his conversation with Patterson. He cited the case of the failure of young people to use a fully equipped vocational training unit set up in their community.

However, Golding failed to grasp the true meaning of my appeal and, in truth, I did not explain it sufficiently. I was talking about something much deeper and broader than a training center – the treatment of an entire class of people by another class. Specifically, how do those in the low-income strata, those on the Advancement Through Health and Education (PATH) Program, those who wait in line for hours at Kingston Public Hospital (KPH) and squatters are treated by the political class and those at a much higher income level. Do you think that the different treatments are not noticed by those who receive them? I am not asking for a leveling of all to the same standard of living, only a certain justice, a certain equality of the basic elements – food security, medicine, housing, education and work.

The recent fish kill in the Rio Cobre is a good example of what I mean. Year after year, the same thing, requiring serious protests to finally get change. Must it have taken so long? Who was responsible for the treatment of community members? Were the people primarily responsible? Ronnie Thwaites recently mentioned (the gleaner August 8, 2022) to the resolution he tabled in Parliament in 2018 for a cost-benefit analysis of the bauxite industry. It was never debated. The Jamaica Environment Trust has made similar appeals over the past two years.

So who is responsible for the continued postponement of debate and action on critical issues? Is it the people or their leaders? Issues like traffic control, abortion, republic status, the Caribbean Court of Justice (CCJ) – the list goes on.

More probingly, why? That’s really the question. Golding and Patterson backed off and stumbled together. Recoil because it shines the spotlight on them, on their class position and their motivations. On many issues, the motive is obvious. The ruling party will not antagonize public opinion one way or another – a large number of churches, for example, on the issue of abortion. By doing so, he thinks he could lose an election, lose power. Thus, the public good is withheld – for decades – in the name of partisan advantage.

The underlying motive for such partisan behavior on these issues is that the political class’s concern for the welfare of the lower class does not match its concern for itself. For example, with regard to the issue of abortion, it is women and girls from low-income families, unable to afford a competent doctor, who will use harmful methods or have children they do not have not wanted or expected. In the case of the CCJ, it is the vast majority who cannot afford to take their case to the Privy Council in England who will benefit.

So when a real choice has to be made, concern for the self takes precedence. How else to explain that politicians allow people to be murdered en masse for decades while the two recommendations of the highest authorities have barely been implemented? Why doesn’t Holness follow the path of collective crime consensus to control murder? Why the reluctance to partner with the People’s National Party, the private sector and civil society on the most pressing issue facing Jamaica? Is self-glorification so important?

It is a widely held view that successive administrations have made critical decisions based on what is best for the party rather than in the interests of the Jamaican people.