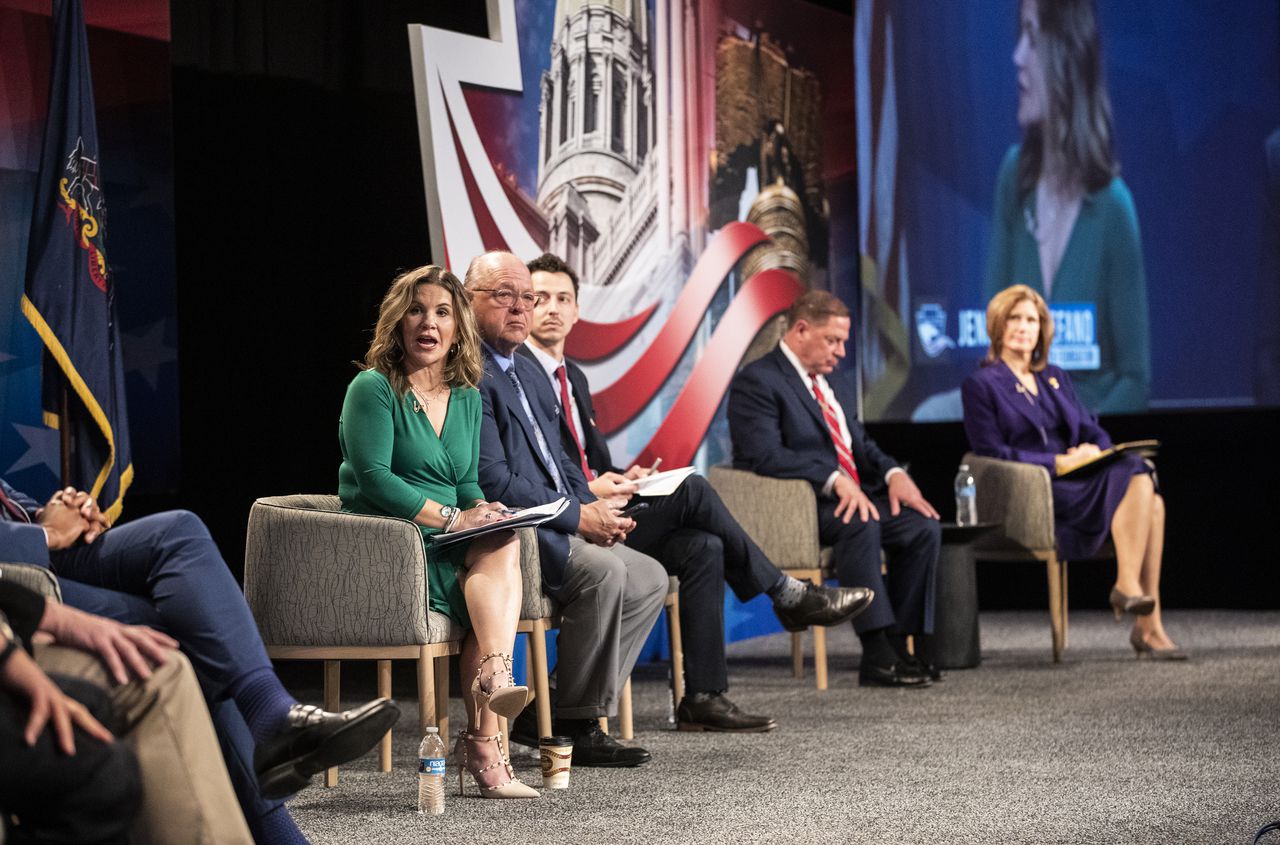 The nine Republican candidates for governor of Pennsylvania appeared before a large rally of conservatives on Friday to explain why they are the best candidate to face presumptive Democratic nominee Josh Shapiro in the fall.

In front of a crowd of more than 700 people gathered at the Pennsylvania Leadership Conference at the Penn Harris Hotel in East Pennsboro Township, each answered questions posed to them for an hour.

Due to the size of the field of candidates, they were split into two panels with Lou Barletta, Doug Mastriano, Nche Zama, Dave White and Melissa Hart on the first and Bill McSwain, Charlie Gerow, Joe Gale and Jake Corman on the second .

The policy-focused discussion highlighted few differences between the candidates’ positions on the issues, with each answering a unique question.

However, a fiery moment came in the final moments of the second panel when Gale called Mastriano a “total fraud”, drawing what looked like an equal amount of boos and applause from the crowd.

The forum, which is rebroadcast on the Pennsylvania Cable Network over the weekend, is perhaps the closest of the nine Republican gubernatorial candidates to sharing a stage, as a candidate or two have been absent from similar rallies that have been held to date around the state.

From what Democratic Party spokeswoman Marisa Nahem heard from the candidates, she said that regardless of which candidate spoke, Pennsylvanians see “a far-right politician who is too extreme and out of touch with our Commonwealth. “.

During hour-long conversations with each panel, Barletta, a former congressman, touted the name recognition and statewide grassroots network he’s built from his unsuccessful run. in the US Senate in 2018 against incumbent Bob Casey as giving him an advantage. He pointed out that while he and Mastriano haven’t aired a single TV ad, both are leading the polls as the governor’s favorites.

Mastriano, a sitting state senator, explained how he can overcome the Democratic voter registration advantage in that state to win the November election with his “bold leadership” demonstrated by rallies on the steps of the Capitol against Governor Tom Wolf’s COVID-19. 19 business closures, fighting for voter integrity, pushing back on vaccination mandates, and ending mask mandates in schools.

Drawing on his experience as a retired heart and lung surgeon, Zama said making health care accessible and of the highest quality should be at the heart of any health care policy. He said as governor he would convene a board of interceptive medicine and pandemic prevention and make health care available statewide through telemedicine.

White, a pipefitter who owns a successful HVAC business, conspicuously avoided a direct answer to a question about whether he would support eliminating the going wage. On another topic, White said he would seek investigations into all those responsible for sending COVID-19 patients to nursing homes and hold them accountable.

Hart, a lawyer, criticized her four opponents – White, Barletta, Corman and McSwain – for setting rules about debate moderators and the structure that should be followed for them to participate.

“If we’re hiding and not answering questions from the public, I don’t know how we can ask them to trust us to solve problems and work together to build the coalitions we need to succeed,” he said. she declared.

McSwain, a former U.S. attorney who stood out as the only prosecutor vying for the GOP nomination, said he would make public safety a priority and defund the police. He also spoke out forcefully on reinstating the death penalty in Pennsylvania on which Wolf placed a moratorium and said he would support its imposition against those involved in the killing of a law enforcement officer. order.

Gerow, CEO of a PR firm who has been a strong conservative voice in the media, was asked how “his sunnier profile” will play with an angry electorate. He said he was as angry as anyone, but coalition building is needed to get things done. He said he would commit to “fighting for our values, our traditions and the things that really make us great”.

Corman, who is acting Senate President, spoke about legislative accomplishments during his 24 years in the Senate. As governor, he would build on that record and get the state out of the liquor business and empower parents to know what students are learning in school. He said he was not running for governor to have power, but rather “to protect your power.”

Gale, a county commissioner, said he would end the prevailing wage on public works projects and oppose the legalization of recreational marijuana for adults. But most of his firepower was aimed at Harrisburg politicians “who deal with workers and unions” for campaign finance. He said what sets him apart is that he is the only candidate who has “no allegiance to the swamp of the Republican establishment.”

After hearing from the first panel of candidates, Chester County’s Joe Layden came away with a good impression of Barletta. It was based on a single comment Barletta made in his closing statement about standing with veterans and that as governor, “any veteran who slept in a desert in Afghanistan will never sleep. under a bridge here in Pennsylvania”.

Layden, himself a veteran, said with that comment, Barletta “went away with it.”

Philadelphia resident Bruce Marshall also liked Barletta saying he has name recognition statewide and “we need an eligible candidate, not just in the primary.”

Adams County’s Mary Wright said she continues to be impressed with Mastriano. “I would like to see him become our nominee,” she said. “But I enjoyed listening to them all.”

Others said they learned little from the candidates, but Center County’s Joyce Haas said she believed the four or five candidates, whom she declined to name, could beat Shapiro, became de more and more refined.

Although she remains undecided as to which candidate will ultimately get her vote, Haas said, “I’m glad there’s such depth.”

But the crowded field also makes it harder to determine which candidate to back, said Wyoming County’s William Eggleston.

“It’s tough this year. There are different ones that I like this year,” he said. “I can’t really choose one. I think we have a lot of good candidates.

“Pastor of today, artist of tomorrow, politician of tomorrow, wherever the breeze blows you there” – DJ Obi castigates Banky W