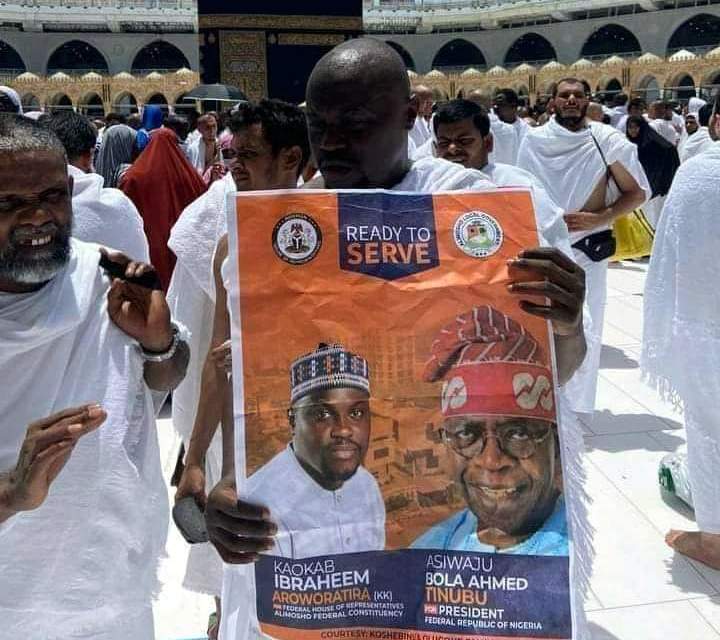 A Nigerian politician, Kaokab Ibraheem, displayed a campaign poster of Bola Tinubu, leader of the All Progressives Congress (APC) and presidential candidate, at the Grand Mosque in Saudi Arabia.

Mr Ibraheem was seen in a photo displaying Mr Tinubu’s campaign poster near the Kaabah at Masjid Al-Haram, the Grand Mosque in Makkah.

Considered the holiest structure in Islam, the Kaabah is a large cubic structure draped in black cloth embroidered in gold with verses from the Quran.

Photos of Mr Ibraheem holding the poster were reportedly taken on Thursday during a special Tawaf held in Mr Tinubu’s honor by his Nigerian supporters at the Grand Mosque.

“Ready to serve,” read the caption of the campaign poster with a photo of Mr Tinubu and Mr Ibraheem. He also aspires to be a member of the House of Representatives. He is seeking to represent the federal riding of Alimosho in 2023.

The Tawaf brought together Islamic scholars and political leaders from Nigeria, including Mr. Tinubu.

The former Governor of Lagos State is a leading presidential candidate for Nigeria’s ruling party, the APC.

Since his official statement in January, Mr. Tinubu has traveled across the country seeking support and promising to make improvements in the areas of security and the economy.

In Saudi Arabia, Mr Tinubu’s supporters said they had “faith that Allah would ensure a peaceful election campaign and Mr Tinubu’s victory”.

“We have come to seek Allah’s favor and blessings for Asiwaju in the upcoming elections,” Mudashiru Obasa, Speaker of the Lagos State Legislative Assembly, said in a press release from his office.

“We do not test Allah’s will and power, but seek His blessings, support and anointing because Allah is sufficient for us. We are doing this to support Asiwaju’s presidential ambition,” said the president, who was also in Makkah for the prayer.

Although it is generally acceptable to visit the Holy Mosque to seek Allah’s favor and His blessings, some Islamic scholars believe that it is wrong to carry political posters around the Grand Mosque.

“Muslims ultimately perform Umrah, the lesser Hajj, with the intention of purifying their souls and rekindling their relationship with God,” said Isa Abdulrahman, a Kano-based cleric.

“This goal is defeated when worshipers take to holy ground with campaign posters,” he added. “The Kaabah is the most important place in Islam. It should never be a motive for political campaigning.

“The Hajj Commission must take serious action on this before the situation escalates,” Sani wrote on Facebook. “Any culprit should be banned for ten years from going to Makkah for Hajj and Little Hajj.”

Support the integrity and credibility journalism of PREMIUM TIMES

Good journalism costs a lot of money. Yet only good journalism can guarantee the possibility of a good society, an accountable democracy and a transparent government.

For free and continued access to the best investigative journalism in the country, we ask that you consider providing modest support to this noble endeavour.

By contributing to PREMIUM TIMES, you help sustain relevant journalism and keep it free and accessible to everyone.