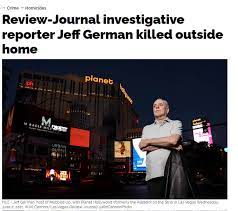 “The possibility that German was murdered by a government official in retaliation for his work as an investigative journalist is horrifying and deeply disturbing. It demands a resounding response from politicians to commit to defending press freedom and the safety of journalists. We join German’s family and his colleagues from Las Vegas Review-Journal mourning his devastating loss, and we stand with all journalists against attempts at intimidation and silence.

German was working on a story about Telles the week he was killed, according to the Review-Journal. Telles has been the subject of articles about his surveillance of his office, and German has reported that Telles created a hostile work environment and had an inappropriate relationship with a staff member.

In June, Telles conceded a close Democratic primary race for his first deputy; the loss may have been linked to negative stories about her.

German was one of Nevada’s most accomplished and trusted journalists; he was found dead with stab wounds outside his home last Saturday morning. His work in Las Vegas spanned four decades and he told many great stories about government malfeasance, political scandals and organized crime. His reporting has often led to government reforms or personnel and policy changes.

PEN America stands at the intersection of literature and human rights to protect free expression in the United States and around the world. We defend the freedom to write, recognizing the power of the word to transform the world. Our mission is to unite writers and their allies to celebrate creative expression and defend the freedoms that make it possible. Learn more at pen.org.