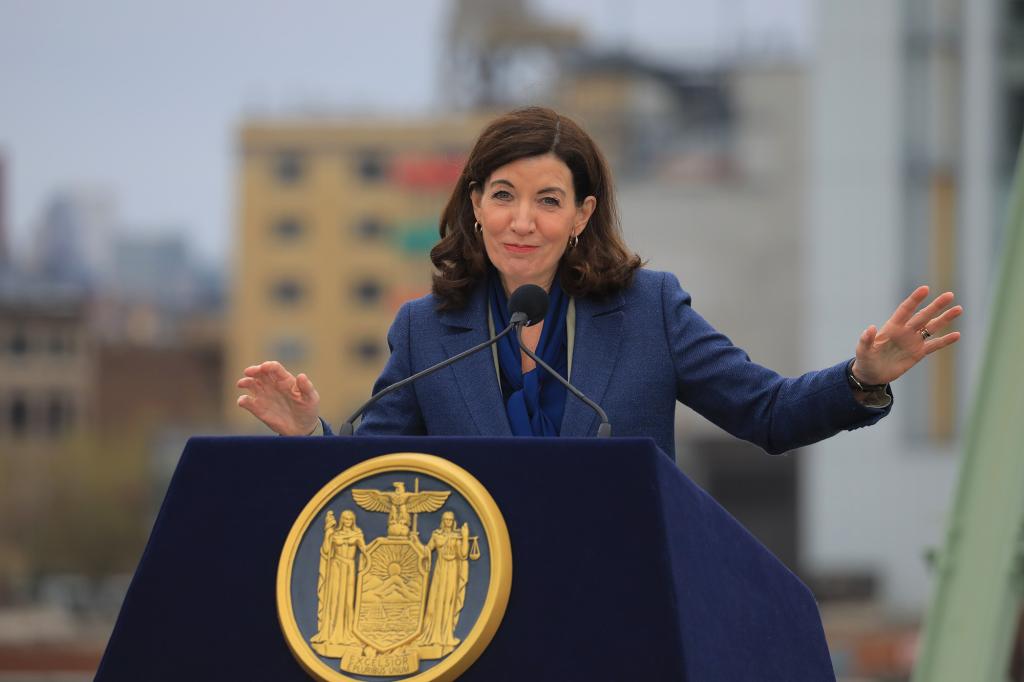 Kathy Hochul says her childhood turned her into a politician

The Wing at Buffalo

Kathy Hochul. No shrinking purple. No used rose. Tight as a Lego block.

“Growing up in Buffalo, ostracized, I learned roughness and tumble. My mother was an abandoned child. Dad, from an immigrant family, worked at the steelworks. We lived in a trailer. Wore used clothes. My mother had six children. I still have bruises from nuns at Catholic school hitting my knuckles with a ruler. I was rebellious so mom took me to sixth grade.

“No one went out with me. I looked simple. Crooked teeth. No one taught me how to do makeup or do my hair. I babysat and worked in a pizzeria.

“I can rule with force. Iron fist in a velvet glove. Glove and I’m pretty tough. I am Irish. Irish Alzheimer’s is that you forget everything except grudges.

“I spend five nights a week in a hotel. The staff are my friends. Last night, in a restaurant, I spoke to the chef in the kitchen. And I’m used to pulling myself together. Plug in electric curlers, brush hair, throw curlers, put on makeup during a staff call, and phone my husband so he doesn’t think I forgot about him.

“A hairdresser friend sometimes comes at 6 a.m. for touch-ups. Look, it doesn’t always work out well and I’m not as classy as I look. Eating with the Bronx Borough President’s butter from my English muffin went down the front of my new blouse. Fortunately, another was in the truck below. Listen, I changed in the bathroom. Even when I’m desperate – in my truck. The windows are tinted and I throw everyone out.

“Starting with a construction site, then a Passover event, then handing out food, then an LGBTQ gala in the evening. I did four changes of clothes in one day.

Uninvited COVID suddenly canceled my dinner next week in honor of Kathy Hochul. This gala and its guest list will resurface after Election Day.

COVID zapped our traditional White House event for two Easters. It finally happened this time though semi-shloomier than in the Nancy Reagan days. To quote the immortal Chaucer: Part of the party actually laid an egg.

The bags of the famous colored hard-boiled eggs – all fake-o’s – were soaked in rain. And after a photo shoot, Joe in slow motion slipped inside. The so-called American leader took shelter like his son the financier.

A zero president should manage Ukraine when he can’t even manage Easter?

And as for psock-it-to-me-Psaki, Joe’s mouthpiece. Check fake red hair and real brown roots and everything she spits.

Magic Johnson has grabbed an Apple TV+ docuseries. It’s “They Call Me Magic” about “good times, hard times, struggles with my wife.”

David Arquette produces. Sis Rosanna says, “Magic brings magic to trouble. Friends are crazy. Stevie Wonder: “He plays the game of life.” Samuel L. Jackson: “It’s a sponge. Basketball, then hit, then back, then a member of the “Dream Team”. ”

Scores or dribbles, it will premiere on April 22.

So if you can’t decide who the best candidate is, forget it. Choose the one that will hurt us the least.

Inslee appoints Michael MacKillop Director of Services for the Blind