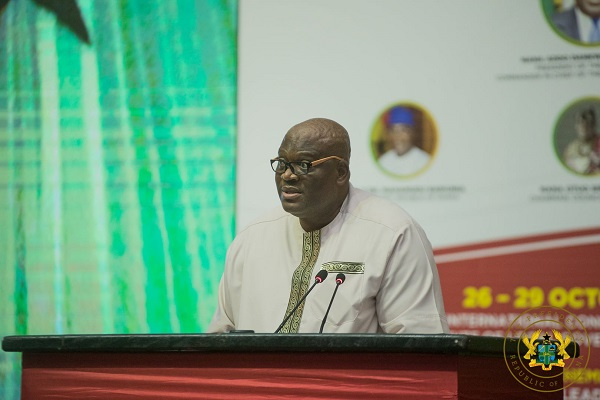 Henry Quartey is the most active government official in 2021

Some government officials in 2021 performed exceptionally well in their respective offices, gaining public recognition and some gaining hatred from a percentage of the population.

GhanaWeb readers chose Henry Quartey as the most active government official in 2021 in a poll conducted by ghanaweb.com.

“Henry Quartey did well. And anyone can attest that he is doing a good job in the country. I am going to tell you something that will shock you, he actually said he was not interested in being Minister of Greater Accra at the start and I told him that is exactly what you would do so he would have to adapt to it. And now everyone can see that he came to do the job and not to player.

Henry Quartey adopted proactive measures in 2021 to make his region work, including the relocation of traders from Agbogbloshie to Adjen Kotoku after several unsuccessful attempts.

Below are some of the things he did, which earned him a name from the Ghanaians:

Mr. Quartey took the initiative to relocate the onion sellers to the Agbogbloshie market to ensure that the decongestion exercise is carried out. It drew negative reactions, but Mr Quartey felt it was the only way to help develop the city.

Although traders opposed this move with all their might, the minister did not give in to his efforts to permanently remove them from the market that has existed for so long.

He eventually succeeded in moving all traders from Agbogbloshie to Adjen Kotoku on July 1, 2021.

Henry Quartey said the government had identified land in Afienya and was working to allocate it to parts dealers.

Demolition exercise in parts of Accra

As part of its initiative; â€œLet’s Make Accra Work,â€ Henry Quartey led a massive decongestion exercise in which hundreds of unauthorized structures were removed to help keep Accra clean.

As he embarked on a decongestion exercise on Monday, July 26, 2021, he demanded the immediate dismissal of the municipal environmental health officer (MEHO) of the central municipality of Ayawaso, Emmanuel Sonni Alohleveh, from his functions.

According to Mr. Quartey, Sonni Alohleveh was absent from his post for two weeks without any form of notice to his superiors.

However, Railway Quarters squatters along Graphic Road in Accra, among many others, were left homeless during the decongestion exercise.

Ensure that some people have been sanctioned for violating sanitation protocols

A resident of Kokomlemle in Accra was arrested for directing sewage from her home into the street.

The arrest was made following an order from the Regional Minister for Greater Accra, Henry Quartey.

According to the minister, the woman’s actions caused illegal damage to government property.

The minister quoted part of section 172 of Law 29 which says that anyone who intentionally and unlawfully causes damage to property by any means of a value not exceeding GH Â¢ 1 million, or of no value pecuniary, will be guilty of an offense.

Forced suppression of sirens by ministers, deputies, others

In July 2021, the presidency issued a directive prohibiting ministers, deputies, CEOs of public bodies, MMDCEs, among others, from using sirens.

To enforce this directive, the regional minister of Greater Accra has granted a two-month grace period to the groups in question to withdraw their sirens in the capital.

â€œWe are warning anyone who uses the siren in Accra to remove it by July. It is in your best interest to remove it. Because after July we will apply the laws backed by the law. We give people two months to comply, â€he said.

The Minister pledged to donate GH Â¢ 1,500 each month to support veteran actor Psalm Adjetefio, popularly known as TT, of ‘Taxi Driver’ fame until 2025. The veteran actor was seen in a viral video pleading for financial help to pay her monthly rent payment worth 3,000 cedis.

This very act of the minister won him the admiration of many, praising him as a man of a tender heart.

Demolition of structures at Rawlings Park

The minister ordered the WADA task force to demolish the structures of Rawlings Park in order to allow vehicles to access the parking lot. This initiative is part of the Minister’s efforts to facilitate movement in the central business district.

All these measures adopted by the regional minister of Greater Accra summed up his campaign â€œMake Accra Workâ€ in 2021.

Although some citizens did not support his measures and strongly vilify him, some praised him for being proactive.

On file with Governor Gavin Newsom: California continues to lead the fight against COVID-19