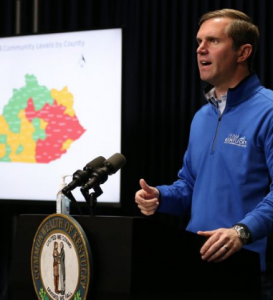 Governor says cases continue to drop, though ‘too many COVID deaths’; questions the “end of the pandemic”

Gov. Andy Beshear announced Monday that he was pausing his weekly COVID-19 updates as case counts and other metrics continue to decline in Kentucky, “and I hope this pause becomes permanent.” .

There were 9,532 new COVID cases last week, down from around 12,000 the previous week, and marking the seventh consecutive week of decline.

The positivity rate fell to 4.17%, the lowest since the delta and omicron variants began affecting the state, as did hospital utilization numbers.

He said there was still a concern the deaths were too high.

“Part of this is due to reports still coming in from January and February, but it continues to be a deadly virus. 283 deaths last week, which is comparable, if not higher, to the previous week. He continues to kill people far too young.

There have now been 14,301 deaths in Kentucky since the pandemic began.

The Governor also shared his thoughts on Joint Senate Resolution 150, which effectively ends the pandemic, as soon as he signs it or, if vetoed, is overruled by both the House and Senate. claiming that she is jeopardizing $50 million. in SNAP benefits.

“SJR 150 is politics at its worst,” he said. “This will take food off the tables of more than half a million Kentuckians, most of them senior citizens and troubled children. The federal government is currently providing these benefits because COVID has not only harmed us in terms of health and infection, it has impacted the supply chain, which has increased the price of food.

He added: “Cutting $50 million worth of food to our people is a mistake, and for what? There are no COVID restrictions in Kentucky, and there haven’t been in six months.

Senate Speaker Robert Stivers, R-Manchester, released a statement that read: “While the Governor says his signature on an executive order declaring a state of emergency is the only remedy that can guarantee extended SNAP benefits linked to the pandemic, we note that an emergency declaration is provided through the emergency administrative regulation process.

“The governor uses his pen to sign the declaration of emergency on the settlement, and the public has the opportunity to participate in public hearings with adequate legislative oversight. If the governor needs anything from the legislature, he still has time to come to us and we have time to respond.

Beshear responded with the hint of a veto: “Those are dollars from the federal government. We don’t pay a dime in Kentucky for extra help. And for my part, I certainly think that our struggling children and our struggling seniors should have enough food. You will likely see action on this later this week.