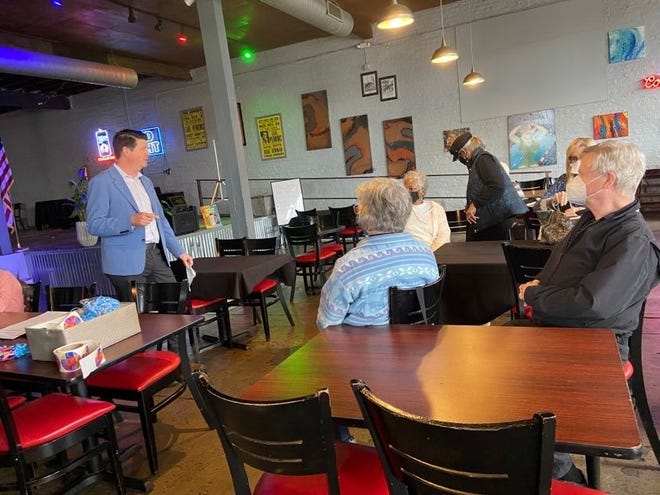 He is also running to become the Democratic nominee for governor later this year.

Martin was in Jackson on Monday to speak to a few dozen supporters at the Baker Bros. BBQ in downtown Jackson.

“This race continues to grow in importance as time goes on, and it may seem like this election is a long way off, but it’s really just around the corner,” Martin said. “The State General Assembly is meeting again and continuing to do Tennessee a disservice in my opinion.”

The two main issues Martin is running for are affordable health care and improving public education.

“What are we fighting for? Quality education in public schools is one because it’s under attack in the state of Tennessee,” Martin said. “For 30 years the state has stifled funding for our public schools to the point that it is now withering away.

“And now the government is blaming teachers, and it’s not fair because our schools need billions of dollars in funding to give these kids a better future.”

Martin then discussed the area in which he has expertise.

“Tennessee leads the nation in the number of rural hospitals that have closed per capita, and more and more citizens are losing access to health care, with many counties not having a single medical facility in urgency in them,” Martin said. “That means if someone breaks their leg or has a heart attack, it could mean 60 or even 80 miles they have to travel for that urgent care, and that’s not enough.”

“Mayor Craig Fitzhugh of Ripley was once a state representative, and he said Tennessee’s failure to expand Medicaid is the greatest moral failure in the history of the state legislature,” said Martin. “And I also believe that because it’s not only the right thing to do to give everyone access to affordable health care, but it’s been doing business ever since because we’re losing $1 billion a year because we don’t let’s not take care of our neighbours.”

Readers of The Day – Day weigh in on the gubernatorial race