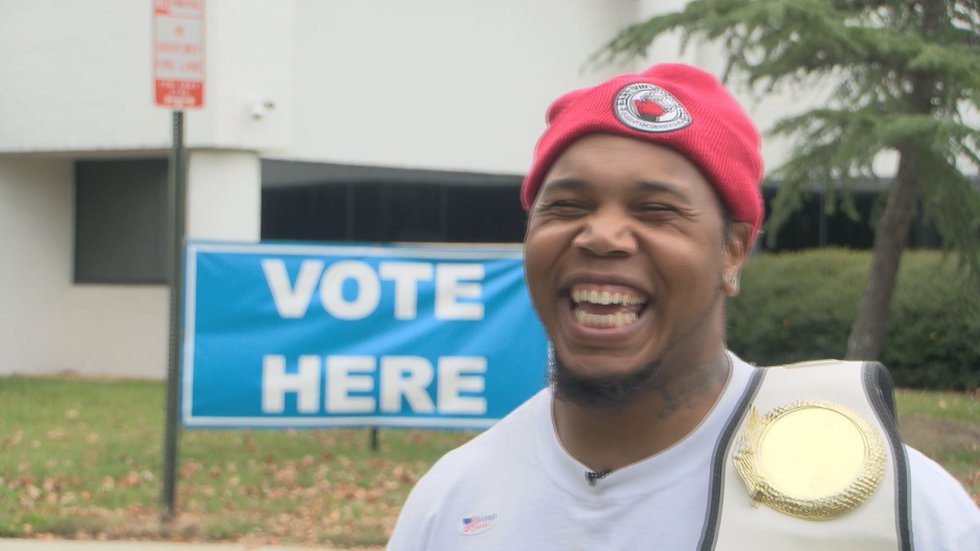 â€œI was caught up in a different lifestyle, man. I was different, â€Holden said. “I’m a two-time criminal, but I’m also an asset.”

Holden was just 18 when a criminal life on the streets sentenced him to nine years in prison, but since his release in 2017 he has spent the past four years fighting his way back to being a productive member of the the society.

â€œI’ve always been a fighter,â€ Holden said. â€œI graduated from university; I got a four year plumbing apprenticeship, got my Class A CDL, I’m a three year licensed driver.

In the years since his release from prison, Holden says he turned to boxing for release. He now serves as a mentor to young people, using boxing as a tool to distract them from the streets. Holden also travels across the country, participating in various boxing competitions promoting his brand.

But Holden has said for a very long time that the only thing that kept him from being a full citizen was regaining his right to vote after going to jail.

â€œThe only thing I couldn’t accomplish was get my rights back,â€ Holden said. “I did not have the right to vote even though I had an opinion on so many different issues.”

That was until recently, when a life-changing encounter tied Holden to the restoration of his rights.

So Thursday, with a championship boxing belt on his shoulder, the former criminal strutted to the polls early to vote for the first time in more than a decade.

â€œI never voted for a governor in Virginia,â€ Holden said. “I cried. I was in tears, man.

â€œThe first time I voted it was a great feeling because I feel like I have a voice – my vote counted,â€ Pervall said. â€œI said I would like to put this person in the office, and I had a voice for the first time. So for me to vote, that said a lot because it was the first time I heard my voice in public.

Thanks to Governor Ralph Northam, nearly 70,000 more former detainees were restored to their civil rights in March.

“Too many of our laws were written in an age of racism and open discrimination, and they still bear the marks of inequity,” Northam said. â€œWe are a Commonwealth that believes in the need to move forward, not to be bound by the mistakes of our past. If we want people to return to our communities and participate in society, we have to welcome them back fully – and this policy does just that. “

Holden says he wasn’t aware he could have his restored until he learned that community activists were helping people like him regain their rights.

Holden refers to Clovia Lawrence, a radio show and host and activist, and executive director of Project Give Back to the Community, which serves as a platform for prisoners, former prisoners and all citizens of Virginia to give back and contribute positively to their community.

â€œWe believe in holistic reintegration,â€ Lawrence said. â€œWe believe that men and women, once back from incarceration, should be fully restored as citizens, which includes the right to vote.

During the 2021 election season, Lawrence helped returning citizens regain their rights by navigating them to the online restoration portal.

â€œOtha contacted me and told me that the vote was close to his heart for a long time,â€ Lawrence said. “I sent him the link on restore.virginia.gov and told him all he had to do was find the name you were convicted with and the last four digits of your social security number.”

Lawrence said shortly after getting his rights reinstated. She also helped him register to vote.

Now Holden is using the same hand that put him behind bars to lead by example and make a tangible difference, one vote at a time.

This is the hand that counts, â€Holden said. “It’s the hand I write with, and it’s power.”

If you are a former inmate and your rights have not been restored, it is too late to vote in this election, but it is not too late to have them reinstated for the next. You can find the link to recover your entitlement, HERE.

Want the best NBC12 stories delivered to your inbox every morning? Subscribe here.