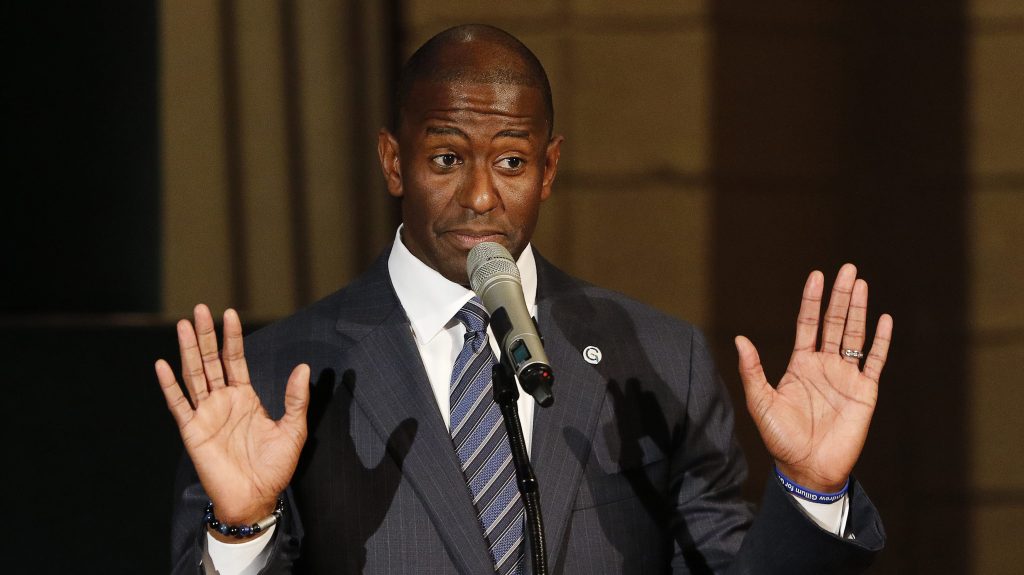 Former Democratic gubernatorial candidate and former Tallahassee mayor Andrew Gillum has been charged by the federal government with 21 counts, including conspiracy and wire fraud. Prosecutors say the 42-year-old ex-politician is accused of channeling donations through third parties and then funneling the funds back to himself for his personal hobbies.

In addition to the indictments Gillum already faces, he was also accused of falsifying statements to the Federal Bureau Investigations claiming he never received or requested donations from two developers who posed as undercover FBI agents. Informants offered gifts and money to Gillum in exchange for support for projects.

According to reports, the undercover agents were asked to donate $100,000 to his campaign and also paid for Gillum’s hotel, food and drink, a boat ride and a ticket to see hamilton on Broadway, during a visit to the politician in New York. Gillum later denied receiving any funds or gifts from the posing developers, and claimed to have ceased all communication with them.

If things weren’t already bad for Gillum, his name has been linked to an accomplice. Sharon Janet Lettman-Hicks, 53, a communications company owner, is named as a co-defendant in the wire fraud charges. Hicks is accused of passing money to Gillum through paychecks, according to U.S. Attorney Jason R. Coody. Prosecutors accuse the duo of “conspiring to commit wire fraud, by unlawfully soliciting and obtaining funds from various entities and individuals through false and fraudulent promises and representations that the funds will be used for legitimate purposes.” .

Gillum and Hicks have denied the allegations against them.

In a statement made public, Gillum said his case was “not legal, but political.” He continued, “Throughout my career, I have always stood up for the people of Florida and spoken truth to power. I’ve had a target on my back since I became mayor of Tallahassee. They found nothing then, and I have full confidence that my legal team will prove my innocence now.

Another unnamed party in the indictment also claimed to have donated $250,000 to Gillum’s campaign, and only $100,000 of that was actually used for the cause. Again, the two said the remainder of the donation went to voter education programs, although the service was never provided. In fact, the remaining $150,000 went to Hicks’ company. She pocketed some of the funds and sent the rest back to Gillum in various payments ranging from nearly $3,600 to $10,000 each.

Gillum was once considered a “breath of fresh air” in the Democratic Party, until a few life events intoxicated his successes. In 2018, Gillum was hired as a CNN analyst after proving himself as a charismatic politician in his governorship for Tallahassee. After winning the hearts of Democratic activists, less than two years later, Gillum was found drunk and unconscious in a hotel with two other parties, one of whom was a male escort. Gillum soon entered a rehabilitation center and later revealed his bisexuality in a TV interview.

The next trial date is set for August 16, with Gillum and Hicks both out on bail.