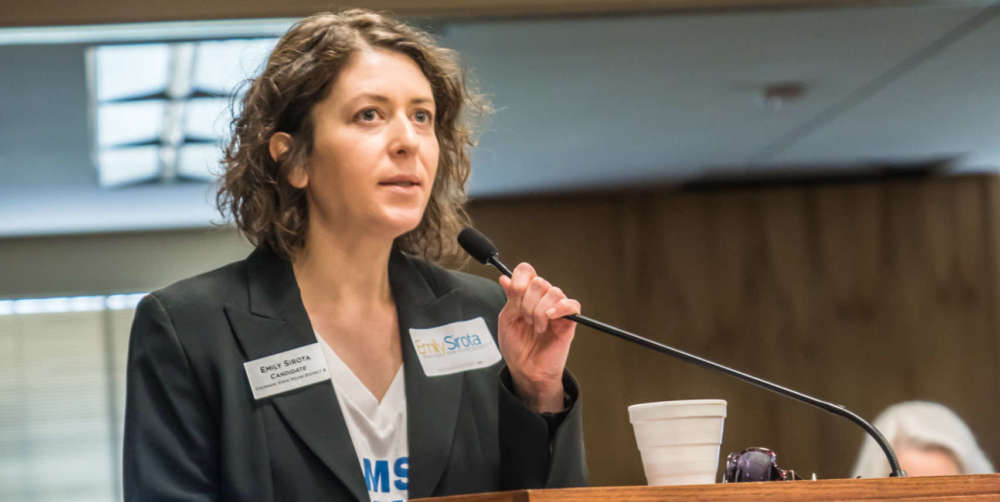 There’s a lot of debate about what it means to be a progressive these days, but to state Rep. Emily Sirota (D-Denver), correctly labeling what she does is far less important than discussing why she does it. made.

“I also have a degree in social work and I think a lot about how the foundations of this profession are anchored in social justice,” Sirota explained. “And so I think for me, when I say progressive, what I mean is that I’m pursuing policies that seek to address racial, economic, environmental and social justice.”

Still, Sirota calls herself a Progressive Democrat, even though she explains that the word has been used in so many different contexts its meaning becomes more and more opaque.

“I guess I’m using that word because it’s a publicly identifiable word that signals certain belief systems,” Sirota said. “But I think its meaning has probably diminished over time, so now, you know, it’s a word that almost all Colorado Democrats, probably at least two-thirds of Colorado Democrats, would be happy to. ‘to be called. “

Sirota’s commitment to her conception of progressivism guided her throughout her career in politics and beyond.

After earning a political science degree from Indiana University, Sirota worked as a legislative assistant in Washington DC before joining the administration of former Montana Gov. Brian Schweitzer in 2005. It’s in Montana that Sirota started to feel something nagging at her. That maybe she was going to take a different path outside of politics.

“I really enjoyed working for Governor Schweitzer. I loved his team, ”said Sirota. “Politicians are still worried about the next election. People have donors they need to listen to. It just weighed heavily on my heart. And so, I realized that I wanted to try this from a different angle.

Sirota explained that her motivation for entering politics was initially that she wanted to help people. But over time, she found that she had a desire to be more active in her service. She wanted to do things with people rather than just for them.

“A lot of times policymaking has felt like people in a conference room making choices that have impacted the lives of thousands or millions of people without really understanding them,” Sirota said. “I didn’t like it.”

So, Sirota went to the University of Denver to pursue a master’s degree in social work and worked in the field at Warren Village, a non-profit organization that provides safe transitional housing to low-income single-parent families in Denver.

She then joined the Colorado Progressive Coalition, a progressive advocacy group that is now part of the Racial Justice Group. Colorado People’s Alliance. There, Sirota focused on community organizing around progressive issues, including supporting paid sick days.

During our interview, Sirota repeatedly said that she did not expect to be elected. She thought she would stay out of politics altogether or stay in the background, working as a political organizer or assistant.

“I never really saw myself as a person up front,” Sirota said. “And it’s funny to think of it, but I still don’t necessarily see myself that way.”

But her preference for behind-the-scenes work was uprooted in 2018 when Sirota announced his candidacy to represent House District 9, covering Southeast Denver, in the Colorado House of Representatives.

“I think I finally came back to politics because public policy has such an impact on people’s lives,” Sirota said. “And I think, you know, unless we make these changes at a macro level, what we keep doing is just dressing up all the problems we have in society.”

In 2021, Sirota completed its third legislative session. During her tenure, she gained notoriety as one of the most progressive Democrats in the caucus. It has a lifetime rating of 100% by Colorado Conservation Legislative dashboard, a 100% lifetime assessment by the Colorado Women’s Lobby, and a mark of 7% on the right American Conservative Union.

Sirota’s bills are also indicative of his political ideology. She praises her work in the fight for workers’ rights, campaign finance reform and environmental justice. In 2021, Sirota sponsored a bill this leading the way for Universal Pre-K in Colorado by 2023 and continues to work on the new state agency responsible for it.

“I think it’s really exciting work,” Sirota said. “I think it doesn’t necessarily get all the publicity, attention and interest from people, but I really enjoy working on early childhood issues that impact Colorado children and families. “

Earlier this year, Sirota presented a bill increase taxes on the income of wealthy people and companies in the oil and gas and insurance industries. The bill, promulgated in June, guaranteed tax relief for people with children, small business owners and middle to low income Coloradans.

Sirota explains how she learned to take the lead when she’s an expert on an issue, like tax reform, and when to play a supporting role on a bill she isn’t as well informed about.

“You can’t specialize in everything,” Sirota said. “But I can recognize in my colleagues, this person knows a lot here, so I can play a supporting role to the senator [Julie] Gonzalez or Representative [Serena] Gonzalez-Gutierrez regarding criminal justice reform. I can support Representative [Steven] Woodrow or representative [Dominique] Jackson on housing policy.

Sirota is satisfied with the progress of the legislative session of 2021; lawmakers have passed over 500 bills this year. But she mentioned that she still wanted more action on the climate. Sirota explains that competing interests of politicians, compounded by lobbying, can be frustrating when trying to meet the needs of her community or the planet.

“It’s inevitable that you can’t always do everything you set out to do,” Sirota said. “But I don’t know, you have part of it.” And that sounds like a pretty crappy response at a time when we breathe toxic air. “

The UN Intergovernmental Panel on Climate Change released a damning report last week stressing that humans must change their behavior drastically to avoid more extreme weather events and other effects of climate change.

“No one feels like things are being handled with the sense of urgency that this moment demands,” Sirota said. “This moment does not require incrementalism, and yet this is how our system is configured to operate. And when you live in a state like Colorado where we are simply bound by policies like TABOR that created an absurd system and absurd to try to finance the needs of the state. It makes this problem so much more difficult for us to deal with than elsewhere. “

The value of popular pressure

Speaking of other lessons she learned during her tenure, Sirota underscored the need for progressive activists outside the system to continue to pressure politicians to act, including, but not doing so. limit, climatic problems.

“There are many powerful interests at work that will continue to make their desires and interests known, so it is essential that the same be true for our community,” said Sirota. “I really want to hear from people in my community what they need me to do. “

Sirota quoted Frederick Douglass as citing a specific example of how someone outside the mainstream political system can influence politics.

“It’s that saying, ‘Power grants nothing without a demand,’” Sirota said. “You don’t get big systemic changes unless there is demand and pressure from outside the system to make that change. For example, I don’t think it’s a coincidence that Colorado was the first state to pass this massive police reform bill that we passed last June. It wouldn’t have happened if we hadn’t been sitting in this building with the whole Capitol surrounded by people protesting and demanding changes.

Last year, Colorado passed a revolutionary, unprecedented Police reform bill that was spurred by demonstrations of police brutality across the state.

Sirota clarified that much of the legislation included in the bill was the result of years of work by various Colorado lawmakers and advocates, but the protests were certainly a push for the passage of the bill. .

“And I think that kind of organizational work is essential to get us where we need to go,” said Sirota. “It won’t happen without community pressure because the ‘powers that be’ have even more money and more lobbyists to be able to influence policy in a way that suits them.” What does the community have, however? Well, the community has less money, but it has more people. And he has more voice. It is simply a matter of organizing and reminding elected officials who they represent and for whom they should work.