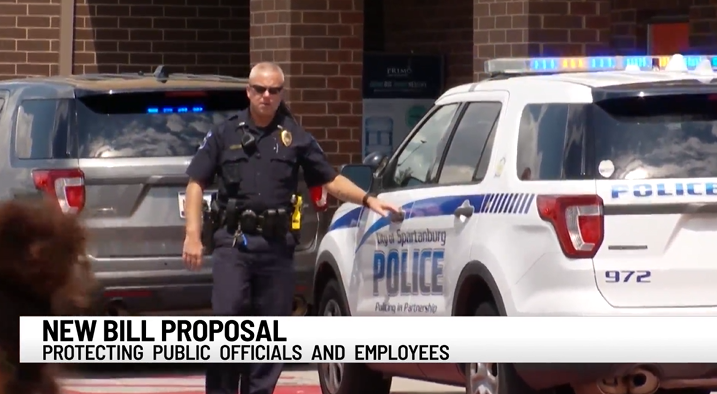 SPARTANBURG, SC (WSPA) – Citizens who assisted a police officer in a 2020 Walmart attack were honored on Monday, as officials discussed a police threat bill.

Officers were called to a Walmart in Spartanburg about a disruption and a brawl in August 2020.

The call was then upgraded to a broken down officer call. The officer on leave, Erin Hansen, was working in security for Walmart, when he was attacked by a suspect in the store, according to Spartanburg police.

According to the Spartanburg County District Attorney’s Office, the man assaulted the uniformed city police officer without provocation as the officer stood near the automatic checkout line.

READ MORE: 24-year-old man gets bail for attempting to kill officer on leave at Spartanburg Walmart

Police said the man, later identified as James Ray Cunningham, 22, of Woodruff, was charged in the incident.

Several passers-by who witnessed the attack pulled Cunningham from the unconscious officer. Passers-by stopped the attack while others in the store called 911. Cunningham punched a customer several times before running away from the store.

â€œWe have had citizens who not only said something, but they did something. They kept him from further injuring himself and possibly even losing his life, â€said Spartanburg Police Chief Alonzo Thompson.

On Monday, four of the citizens who helped were honored. They are now recipients of the Bill Barnet Award for their heroic actions.

â€œEveryone calls me a hero, but I just did what was instinctive. You know, I couldn’t see somebody hurt like that and just watch, â€said Bill Barnet Award recipient William Strong.

“I’m just extremely grateful, I mean I owe the world to them,” said Officer Erin Hansen of the Spartanburg Police Department.

Currently, the state has a law to threaten a public official with a fine of up to five thousand dollars or up to five years behind bars if convicted. Authorities are now pushing to increase this penalty with a new bill if anyone takes action against this threat to harm others.

“We would like to call on our lawmakers, as well as our governor, to review it and consider passing the bill to provide additional protection for the people, our public employees and those who serve the people, and we need it, “said attorney Barry Barnette.

If the bill passes, anyone found guilty of threatening and carrying out a threat could face up to 30 years in prison.

â€œIt must be accompanied by a manifest act. So this is what is different and it must relate directly to the public responsibilities of public officials, â€said Representative Max Hyde, District 32, Spartanburg.

“It should be a bigger penalty as they have gone one step further to go forward and execute a threat to make that happen,” Barnette said.

Steps are now being taken to add this new distinction due to incidents similar to the one that happened last year at Walmart in Spartanburg. The new law, if passed, could help further punish those who commit similar crimes.

State Representative Max Hyde says he hopes the bill will be an item on the Criminal Laws Subcommittee’s agenda in the near future.