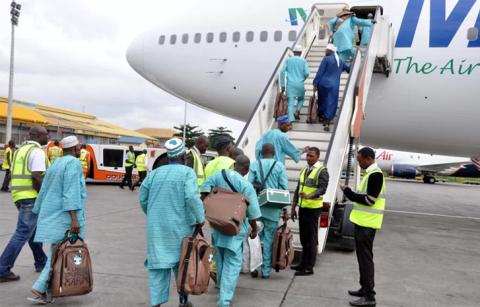 SaharaReporters further learned that the stranded victims who are from Bida Local Government Area in Niger State, paid their Hajj fare to the personal account of an Area Pilgrims Officer (APO) in Bida .

At least 150 prospective Muslim pilgrims are reportedly not performing this year’s Hajj, following an alleged embezzlement of their Hajj fare by an official from Niger’s State Pilgrim Welfare Council, SaharaReporters has learned.
SaharaReporters further learned that the stranded victims who are from Bida Local Government Area in Niger State, paid their Hajj fare to the personal account of an Area Pilgrims Officer (APO) in Bida .

Sources said the stranded pilgrims had resigned themselves to fate, considering Saudi authorities may soon shut down its airspace.
In addition to missing the opportunity to travel for religious duty, the 150 people involved also risk losing their money.
One of the victims, a woman intending to pilgrimage who does not want her name mentioned, said she had paid the money two years ago. But due to the COVID-19 restriction, she couldn’t go.
“We took part in the hajj orientation, not knowing that I had put my money in the wrong hands. Ever since I learned that my money hadn’t reached the board, I’ve been sick with shock. I am not the only person, there are many of us in Bida; several others have no idea they have been duped,” she added.
The president of Niger’s National Pilgrim Welfare Council, Umar Maku Lapai, confirmed receiving several such complaints from stranded pilgrims, who claimed to have paid money into an official’s account.
Lapai, however, said the board could only take responsibility for payments made to his account. Nonetheless, he said the council had directed the chairman of Bida local government area to set up a committee to investigate the matter.
“Council could not take any action until the committee’s findings were known. The suspect has been arrested and the investigation report is expected to be released shortly,” Lapai said.